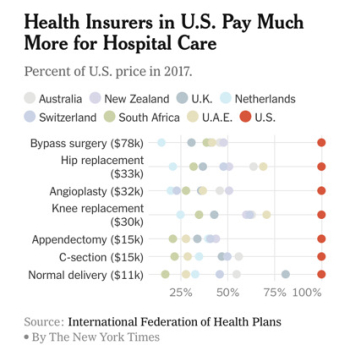 A former student asked me about this chart from the New York Times that highlights much higher prices of hospital procedures in the U.S. relative to a comparison group of seven countries.

The dot plot is clearly thought through. It is not a default chart that pops out of software.

Based on its design, we surmise that the designer has the following intentions:

In the Trifecta Checkup view of the world, there is no single best design. The best design depends on the intended message and what’s in the available data.

To illustate this, I will present a few variants of the above design, and discuss how these alternative designs reflect the designer's intentions.

First up is the following chart that emphasizes countries instead of hospital procedures: 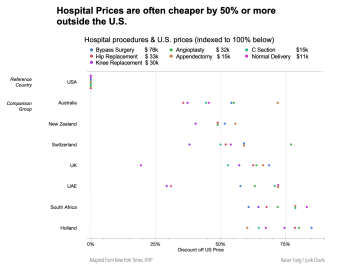 This chart encourages readers to draw conclusions such as "Hospital prices are 60-80 percent cheaper in Holland relative to the U.S." But it is more taxing to compare the cost of a specific procedure across countries.

The indexing strategy already creates a barrier to understanding relative costs of a specific procedure. For example, the value for angioplasty in Australia is about 55% and in Switzerland, about 75%. The difference 75%-55% is meaningless because both numbers are relative savings from the U.S. baseline. Comparing Australia and Switzerland requires a ratio (0.75/0.55 = 1.36): Australia's prices are 36% above Swiss prices, or alternatively, Swiss prices are a 64% discount off Australia's prices.

The following design takes it even further, excluding details of individual procedures: 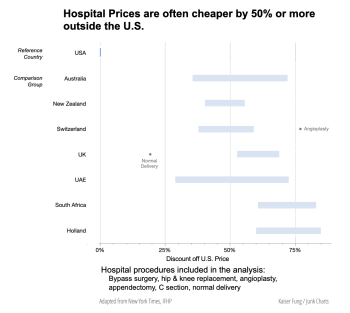 For some readers, less is more. It’s even easier to get a rough estimate of how much cheaper prices are in the comparison countries, for now, except for two “outliers”, the chart does not display individual values.

The widths of these bars reveal that in some countries, the amount of savings depends on the specific procedures.

The bar design releases the designer from a horizontal orientation. The country labels are shorter and can be placed at the bottom in a vertical design: 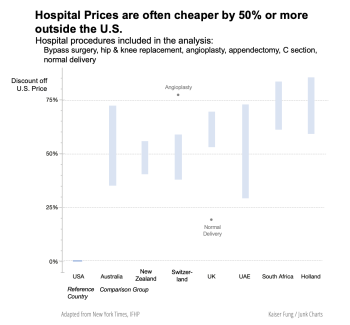 It's not that one design is obviously superior to the others. Each version does some things better. A good designer recognizes the strengths and weaknesses of each design, and selects one to fulfil his/her intentions.