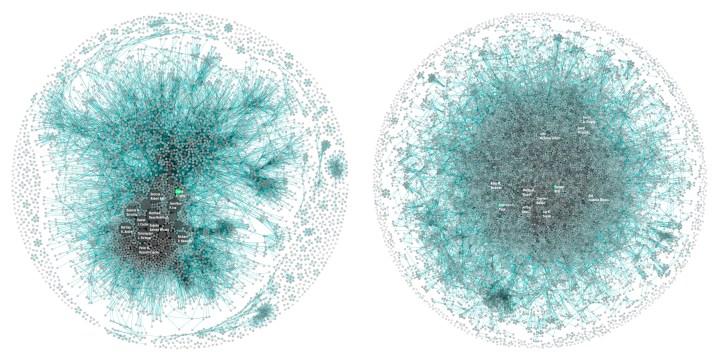 For Co.Design, Periscopic compared patent ownership between Apple and Google, which ends up providing a good idea of company structure.

“Over the past 10 years Apple has produced 10,975 patents with a team of 5,232 inventors, and Google has produced 12,386 with a team of 8,888,” writes Wes Bernegger, data explorer at Periscopic. Those numbers are, frankly, pretty similar in terms of proportion. “The most notable difference we see is the presence of the group of highly connected, experienced ‘super inventors’ at the core of Apple compared to the more evenly dispersed innovation structure in Google,” he continues. “This seems to indicate a top-down, more centrally controlled system in Apple vs. potentially more independence and empowerment in Google.”

Be sure to check out PatentsView too, where these networks stem from.