An author in Significance claims that a single season of Premier League football without live spectators is enough to prove that the so-called home field advantage is really a live-spectator advantage.

The following chart depicts the data going back many seasons: 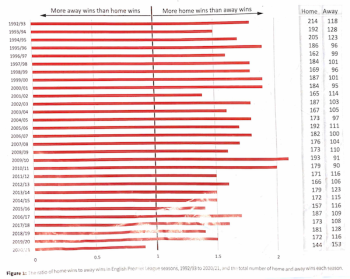 I find this bar chart challenging.

It plots the ratio of home wins to away wins using an odds scale, which is not intuitive. The odds scale (probability of success divided by probability of failure) runs from 0 to positive infinity, with 1 being a special value indicating equal odds. But all the values for which away wins exceed home wins are squeezed into the interval between 0 and 1 while the values for which home wins exceed away wins are laid out between 1 and infinity. So it's an inherently asymmetric graphic for a symmetric formula.

The section labeled "more away wins than home wins" are filled with red bars for all those seasons with positive home field advantage while the most recent season, the outlier, has a shorter bar in that section than the rest. 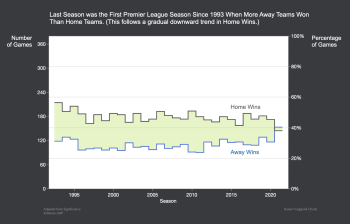 I have incorporated dual axes here - but both axes are different only by scaling. There are 380 games in a Premier League season so the percentage scale is just a re-expression of the counts.