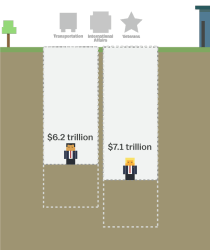 The tax plans of Ted Cruz and Donald Trump might seem fine if you don’t think about the actual values. Tax cuts. Less government spending. But then it gets tricky when you look at what they’re actually proposing. Alvin Chang for Vox provides a simple interactive to show what the Cruz and Trump and budgets require.

They want to cut so much government spending that it’s virtually impossible to figure out how they’d do it. Cruz wants to cut spending by $8.6 trillion over the next decade, according to a Tax Policy Center analysis, and Trump wants to cut it by $9.5 trillion. To put this in perspective, the entire budget for this fiscal year is $3.9 trillion.

Be sure to go to the bottom to try to balance the the budgets yourself.