The disorganized nature of U.S.'s response to the coronavirus pandemic has created a sort of natural experiment that allows data journalists to explore important scientific questions, such as the impact of containment measures on cases and hospitalizations. This New York Times article represents the best of such work.

The key finding of the analysis is beautifully captured by this set of scatter plots: 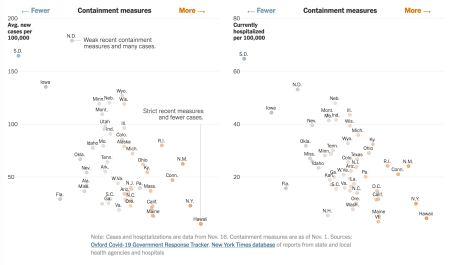 There are a few features worth noting.

The severity index came from a group at Oxford, and is a number between 0 and 100. The journalists decided to leave out the numerical labels, instead simply showing More and Fewer. This significantly reduces processing time. Readers won't be able to understand the index values anyway without reading the manual.

The index values are doubly encoded. They are first encoded by the location on the horizontal axis and redundantly encoded on the blue-red scale. Ordinarily, I do not like redundant encoding because the reader might assume a third dimension exists. In this case, I had no trouble with it.

The easiest way to see the effect is to ignore the muddy middle and focus on the two ends of the severity index. Those states with the fewest measures - South Dakota, North Dakota, Iowa - are the worst in cases and hospitalizations while those states with the most measures - New York, Hawaii - are among the best. This comparison is similar to what is frequently done in scientific studies, e.g. when they say coffee is good for you, they typically compare heavy drinkers (4 or more cups a day) with non-drinkers, ignoring the moderate and light drinkers.

Notably, there is quite a bit of variability for any level of containment measures - roughly 50 cases per 100,000, and 25 hospitalizations per 100,000. This indicates that containment measures are not sufficient to explain the counts. For example, the hospitalization statistic is affected by the stock of hospital beds, which I assume differ by state.

Whenever we use a scatter plot, we run the risk of xyopia. This chart form invites readers to explain an outcome (y-axis values) using one explanatory variable (on x-axis). There is an assumption that all other variables are unimportant, which is usually false.

Because of the variability, the horizontal scale has meaningless precision. The next chart cures this by grouping the states into three categories: low, medium and high level of measures. 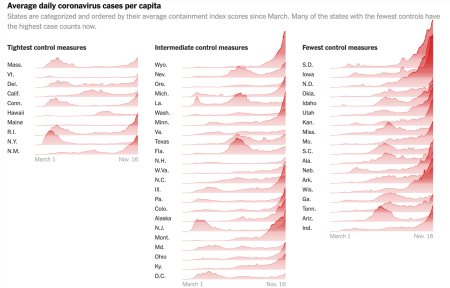 This set of charts extends the time window back to March 1. For the designer, this creates a tricky problem - because states adapt their policies over time. As indicated in the subtitle, the grouping is based on the average severity index since March, rather than just November, as in the scatter plots above.

The interplay between policy and health indicators is captured by connected scatter plots, of which the Times article included a few examples. Here is what happened in New York: 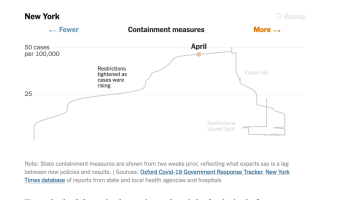 Up until April, the policies were catching up with the cases. The policies tightened even after the case-per-capita started falling. Then, policies eased a little, and cases started to spike again.

You can find the full article here.

Tags:
Share
junkcharts
http://junkcharts.typepad.com/junk_charts/
Related news
Variance is a friend of dataviz 2 days ago
What does Elon Musk do every day? 4 days ago
A color tool for accessible schemes 1 week ago
0 comments