The New York Times found evidence that the richest segments of New Yorkers, presumably those with second or multiple homes, have exited the Big Apple during the early months of the pandemic. The article (link) is amply assisted by a variety of data graphics.

The first few charts represent different attempts to express the headline message. Their appearance in the same article allows us to assess the relative merits of different chart forms.

First up is the always-popular map. 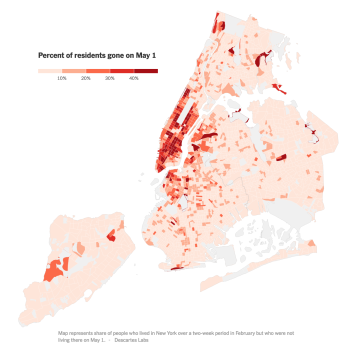 The advantage of a map is its ease of comprehension. We can immediately see which neighborhoods experienced the greater exoduses. Clearly, Manhattan has cleared out a lot more than outer boroughs.

The limitation of the map is also in view. With the color gradient dedicated to the proportions of residents gone on May 1st, there isn't room to express which neighborhoods are richer. We have to rely on outside knowledge to make the correlation ourselves.

The second attempt is a dot plot. 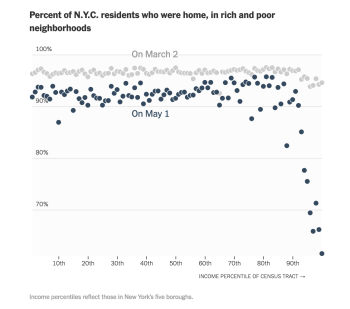 We may have to take a moment to digest the horizontal axis. It's not time moving left to right but income percentiles. The poorest neighborhoods are to the left and the richest to the right. I'm assuming that these percentiles describe the distribution of median incomes in neighborhoods. Typically, when we see income percentiles, they are based on households, regardless of neighborhoods. (The former are equal-sized segments, unlike the latter.)

This data graphic has the reverse features of the map. It does a great job correlating the drop in proportion of residents at home with the income distribution but it does not convey any spatial information. The message is clear: The residents in the top 10% of New York neighborhoods are much more likely to have left town.

In the following chart, I attempted a different labeling of both axes. It cuts out the need for readers to reverse being home to not being home, and 90th percentile to top 10%. 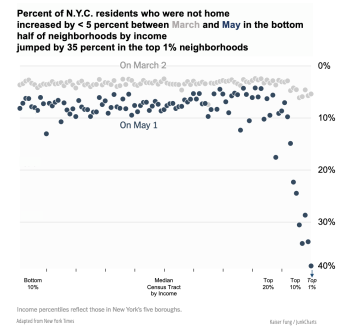 The third attempt to convey the income--exit relationship is the most successful in my mind. This is a line chart, with time on the horizontal axis. 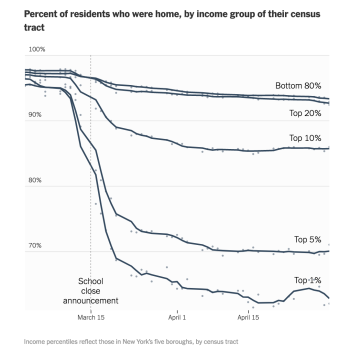 The addition of lines relegates the dots to the background. The lines show the trend more clearly. If directly translated from the dot plot, this line chart should have 100 lines, one for each percentile. However, the closeness of the top two lines suggests that no meaningful difference in behavior exists between the 20th and 80th percentiles. This can be conveyed to readers through a short note. Instead of displaying all 100 percentiles, the line chart selectively includes only the 99th , 95th, 90th, 80th and 20th percentiles. This is a design choice that adds by subtraction.

Along the time axis, the line chart provides more granularity than either the map or the dot plot. The exit occurred roughly over the last two weeks of March and the first week of April. The start coincided with New York's stay-at-home advisory.

This third chart is a statistical graphic. It does not bring out the raw data but features aggregated and smoothed data designed to reveal a key message.

I encourage you to also study the annotated table later in the article. It shows the power of a well-designed table.

Tags:
Share
junkcharts
http://junkcharts.typepad.com/junk_charts/
Related news
Variance is a friend of dataviz 2 days ago
What does Elon Musk do every day? 4 days ago
A color tool for accessible schemes 1 week ago
0 comments