The Wall Street Journal ran this nice compact piece about migration patterns during the pandemic in the U.S. (link to article) 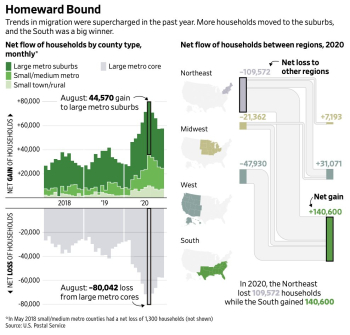 I'd look at the chart on the right first. It shows the greatest net flow of people out of the Northeast to the South. This sankey diagram is nicely done. The designer shows restraint in not printing the entire dataset on the chart. If a reader really cares about the net migration from one region to a specific other region, it's easy to estimate the number even though it's not printed.

The maps succinctly provide readers the definition of the regions.

To keep things in perspective, we are talking around 100,000 when the death toll of Covid-19 is nearing 600,000. Some people have moved but almost everyone else haven't.

The chart on the left breaks down the data in a different way - by urbanicity. This is a variant of the stacked column chart. It is a chart form that fits the particular instance of the dataset. It works only because in every month of the last three years, there was a net outflow from "large metro cores". Thus, the entire series for large metro cores can be pointed downwards.

The fact that this design is sensitive to the dataset is revealed in the footnote, which said that the May 2018 data for "small/medium metro" was omitted from the chart. Why didn't they plot that number?

It's the one datum that sticks out like a sore thumb. It's the only negative number in the entire dataset that is not associated with "large metro cores". I suppose they could have inserted a tiny medium green slither in the bottom half of that chart for May 2018. I don't think it hurts the interpretation of the chart. Maybe the designer thinks it might draw unnecessary attention to one data point that really doesn't warrant it.

See my collection of posts about Wall Street Journal graphics.

Tags:
Share
junkcharts
http://junkcharts.typepad.com/junk_charts/
Related news
What does Elon Musk do every day? 4 days ago
Light entertainment: politics down under 2 weeks ago
Selecting the right analysis plan is the first step to good dataviz 4 weeks ago
0 comments