Reader Mirko was concerned about a video published in Germany that shows why the new coronavirus variant is dangerous. He helpfully provided a summary of the transcript:

The South African and the British mutations of the SARS-COV-2 virus are spreading faster than the original virus. On average, one infected person infects more people than before. Researchers believe the new variant is 50 to 70 % more transmissible.

Here are two key moments in the video: 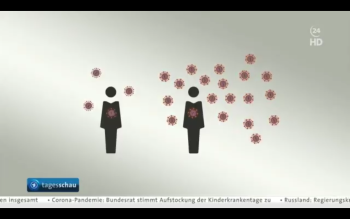 This seems to be saying the original virus (left side) replicates 3 times inside the infected person while the new variant (right side) replicates 19 times. So we have a roughly 6-fold jump in viral replication. 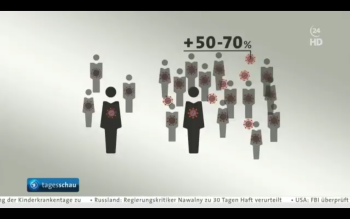 Later in the video, it appears that every replicate of the old virus finds a new victim while the 19 replicates of the new variant land on 13 new people, meaning 6 replicates didn't find a host.

As Mirko pointed out, the visual appears to have run away from the data. (In our Trifecta Checkup, we have a problem with the arrow between the D and the V corners. What the visual is saying is not aligned with what the data are saying.)

It turns out that the scientists have been very confusing when talking about the infectiousness of this new variant. The most quoted line is that the British variant is "50 to 70 percent more transmissible". At first, I thought this is a comment on the famous "R number". Since the R number around December was roughly 1 in the U.K, the new variant might bring the R number up to 1.7.

However, that is not the case. From this article, it appears that being 5o to 70 percent more transmissible means R goes up from 1 to 1.4. R is interpreted as the average number of people infected by one infected person.

Mirko wonders if there is a better way to illustrate this. I'm sure there are many better ways. Here's one I whipped up: The left side is for the 40% higher R number. Both sides start at the center with 10 infected people. At each time step, if R=1 (right side), each of the 10 people infects 10 others, so the total infections increase by 10 per time step. It's immediately obvious that a 40% higher R is very serious indeed. Starting with 10 infected people, in 10 steps, the total number of infections is almost 1,000, almost 10 times higher than when R is 1.

Tags:
Share
junkcharts
http://junkcharts.typepad.com/junk_charts/
Related news
What does Elon Musk do every day? 4 days ago
Selecting the right analysis plan is the first step to good dataviz 1 month ago
Deficient deficit depiction 2 months ago
0 comments