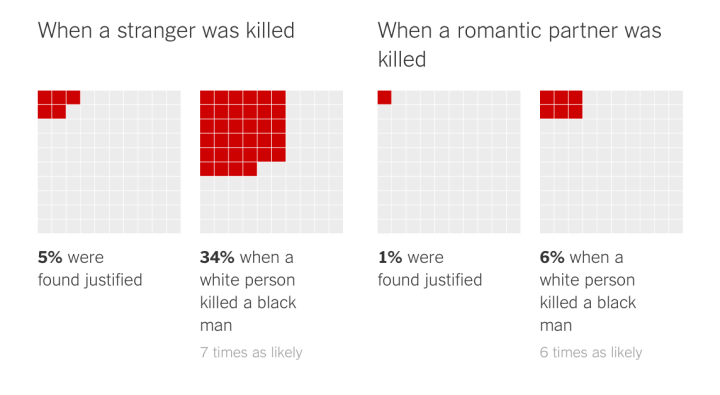 In a collaboration between The Marshall Project and The Upshot, Daniel Lathrop and Anna Flagg analyzed data for 400,000 homicides between 1980 and 2014.

In almost 17 percent of cases when a black man was killed by a non-Hispanic white civilian over the last three decades, the killing was categorized as justifiable, which is the term used when a police officer or a civilian kills someone committing a crime or in self-defense. Overall, the police classify fewer than 2 percent of homicides committed by civilians as justifiable. The disparity persists across different cities, different ages, different weapons and different relationships between killer and victim.

Tags:
Share
Nathan Yau
http://flowingdata.com
Related news
Video series on all the chart types 5 days ago
Car cost vs. emissions 6 days ago
All of the insults 1 week ago
0 comments