In a rich dataset, it's hard to convey all the interesting insights on a single chart. Following up on the previous post, I looked further at the wealth distribution dataset. In the previous post, I showed this chart, which indicated that the relative wealth of the super-rich (top 1%) rose dramatically around 2011. 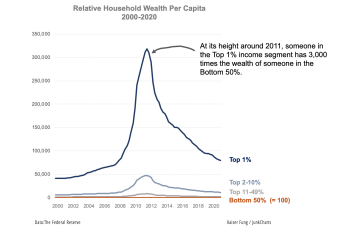 As a couple of commenters noticed, that's relative wealth. I indiced everything to the Bottom 50%.

In this next chart, I apply a different index. Each income segment is set to 100 at the start of the time period under study (2000), and I track how each segment evolved in the last two decades. 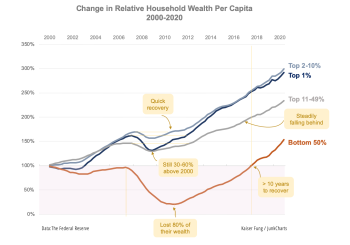 This chart offers many insights.

In the meantime, the other half of the population has seen their wealth climb continuously through the 20 years. This is particularly odd because the major crisis of these two decades was the Too Big to Fail implosion of financial instruments, which the Bottom 50% almost surely did not play a part in. During that crisis, the top 50% were 30-60% better off than they were in 2000. Is this the "trickle-down" economy in which losses are passed down (but gains are passed up)?

The chart also shows how the recession hit the bottom 50% much deeper, and how the recovery took more than a decade. For the top half, the recovery came between 2-4 years.

It also appears that top 10% are further peeling off from the rest of the population. Since 2009, the top 11-49% have been steadily losing ground relative to the top 10%, while the gap between them and the Bottom 50% has narrowed.

This second chart is not nearly as dramatic as the first one but it reveals much more about the data.