Another submission came in from Euro Twitter. The following chart is probably from Germany: 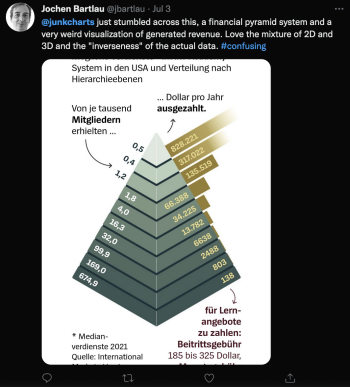 The chart fails because it's not really a dataviz. There are exactly three bars that are scaled according to data. Everything else is presented as data labels.

Each series is exponentially growing (in opposite directions). [Some of the data labels for participants may be incorrect.]

Unfortunately, the triangle is not a good medium to display exponential growth. In fact, the triangular structure imposes a linear growth constraint. The length of the base is directly proportional to the height from the top. As one traverses downwards level by level, the width of the base grows linearly - not exponentially.

To illustrate exponential growth, the edge of the triangle cannot be a straight line - it has to be s steep curve! While natural, the pyramid metaphor is also severely restricting. The choice of chart form has unexpected consequences.

Tags:
Share
junkcharts
http://junkcharts.typepad.com/junk_charts/
Related news
Another reminder that aggregate trends hide information 2 days ago
Four numbers, not as easy as it seems 2 weeks ago
More friendships between rich and poor might mean less poverty 2 weeks ago
0 comments