Last month, I published an interactive visualization that simulates how and when you will die. It reached millions of people worldwide, and I basically had one eye glued to the real-time traffic dashboard for a week. It was kind of nuts.

A few days in, I woke up and checked the stats. The Daily Mail was in the referral list. I clicked through to the article and my interactive was fully embedded on the page, which was strange because I didn't give permission to do that.

To be clear, this wasn't just screenshots or an animated GIF that showed your life moving along. It was the interactive visualization embedded with an iframe so that Daily Mail readers would stay on the tabloid site to take the “test” created by “Professor Yau.” FYI: I have a PhD, but I'm not a professor, and I'm not especially thrilled I got to see my work reduced to some online quiz, but okay.

Never mind that now. The point is that The Daily Mail lifted my visualization and slapped it on their site. This is what it looked like: I was especially confused because just the day before, Stuff.co.nz did the same thing with my visualization (without my permission), so I put in safeguards on both my server and the visualization page itself. Here's me being really mature: 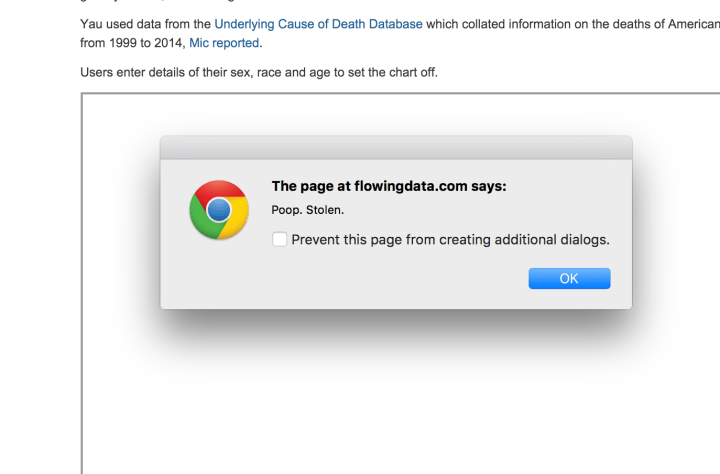 I made an alert pop up that said “poop” whenever someone loaded the Stuff.co.nz page. Like I said, I'm sophisticated.

So how did Daily Mail embed the visualization without the word “poop” popping up on an empty page? They downloaded all the files from my server on to their own server and deleted the snippet that brought up a poop alert. That way they didn't have to deal with those pesky safeguards I setup.

In other words, The Daily Mail deliberately stole my work.

I open up my email for the first time that day to tell someone over there to take down the visualization. I notice there's an email from The Daily Mail asking for permission sent at 1:44am PST. I was sleeping. So obviously I couldn't give a yes or a no. Instead of waiting for a response, The Daily Mail article went up a couple of hours later at 3:38am PST. Apparently a non-response means all systems go and steal everything.

Anyways, I email back after I get my son ready for the day and take him to school. The response is basically oops, sorry, we didn't know.

Do a search for The Daily Mail stealing things — photos, articles, and apparently visualization — and it's clearly their M.O. to take from others. For example, note this tidbit from the New York Times:

One former Daily Mail reporter who declined to be identified for fear it would prevent him from continuing to work as a journalist said that when he started working at the paper, his job required him to rewrite articles that ran in other papers.

Also: Did I mention this is the second time The Daily Mail stole from me? In February 2015, I made an interactive map that compared the best and worst commutes, and I got a similar permission request from The Daily Mail. They asked “to see if we can have permission to grab some visuals generated from this page.”

So, screenshots, right? I said fine, as I typically do with these sort of requests. Then The Daily Mail did this: 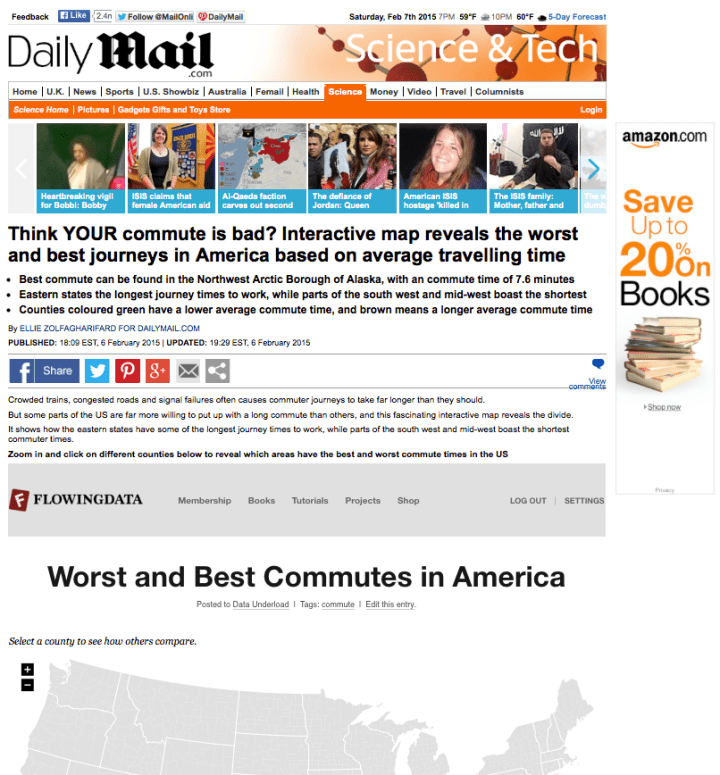 They didn't just screenshot the map. They didn't just embed the map itself. They iframed my entire site, which is why the FlowingData logo and header appear on their site. Yay for hosting bills to pay.

Who does this? The Daily Mail.

Side note: The way I have my own site setup, this was technically an iframe within an iframe. I feel like I should get some spinning top award or something.

Anyways, this is why when they emailed me a couple of weeks before for an “embed link” to show a different interactive on causes of death by age, I didn't respond. They didn't do anything that time. So I probably would've done the same for the simulation graphic had I been awake, but I suppose from now on I will have to respond with a “no thank you” to make it clear. I don't want another non-response mistaken as something else.

Why has this behavior continued for the past several years? I have no idea. I'm a one-man shop with limited time, energy, and resources to figure this stuff out, which is why it took me so long just to write this.

I'd rather be working with data or helping others work with data.

But maybe that's what The Daily Mail banks on. They take what they want, and if someone asks them to take it down later, they comply — after some page views.

What The Daily Mail does is wrong. It's dishonest. If a visualization creator, or any maker for that matter, doesn't include a snippet to embed on a different site, you don't go sniff around the source code for what you can ripoff.

So I write this in hopes that something good might come out of it, or to at least give a record of what's going on here. I am sure this is not the first time this happened to someone. Probably not the last. It already happened to me twice.