Here is the canonical design of the Periodic Table that science students are familiar with. 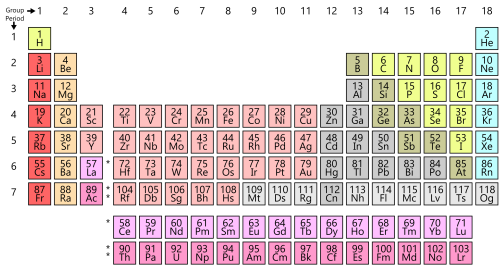 The Periodic Table is an exercise of information organization and display. It's about adding structure to over 100 elements, so as to enhance comprehension and lookup. The canonical tabular design has columns and rows. The columns (Groups) impose a primary classification; the rows (Periods) provide a secondary classification. The elements also follow an aggregate order, which is traced by reading from top left to bottom right. The row structure makes clear the "periodicity" of the elements: the "period" of recurrence is not constant, tending to increase with the heavier elements at the bottom.

As with most complex datasets, these elements defy simple organization, due to a curse of dimensionality. The general goal is to put the similar elements closer together. Similarity can be defined in an infinite number of ways, such as chemical, physical or statistical properties. The canonical design, usually attributed to Russian chemist Mendeleev, attained its status because the community accepted his organizing principles, that is, his definitions of similarity (subsequently modified).

Of interest, there is a list of unsettled issues. According to Wikipedia, the most common arguments concern:

Over the years, there have been numerous attempts to re-design the Periodic table. Some of these are featured in the article that Chris sent me (link).

I checked how these alternative designs deal with those unsettled issues. The short answer is they don't settle the issues.

The key change is to remove the separation between the main table and the f-orbital (pink) section shown below, as a "footnote". This change clarifies the periodicity of the elements, especially the elongating periods as one moves down the table. This form is also called "long step".

As a tradeoff, this table requires more space and has an awkward aspect ratio.

There are many attempts at spiral designs. Here is one I found on this tumblr: 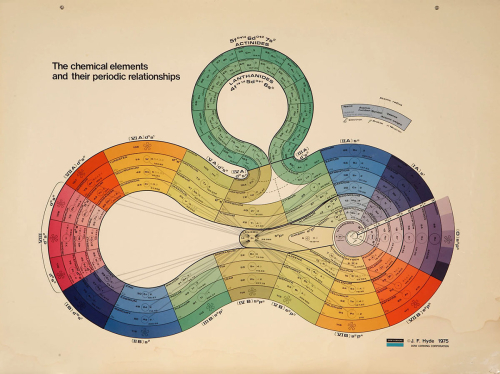 The spiral leverages the correspondence between periodic and circular. It is visually more pleasing than a tabular arrangement. But there is a tradeoff. Because of the increasing "diameter" from inner to outer rings, the inner elements are visually constrained compared to the outer ones.

In these spiral diagrams, the designer solves the aspect-ratio problem by creating local loops, sometimes called peninsulas. This is analogous to the footnote table solution, and visually distorts the longer periodicity of the heavier elements.

For Hyde's diagram, hydrogen is floated, helium is assigned to Group 2, and mercury stays in Group 12.

I also found this design on the same tumblr, but unattributed. It may have come from Life magazine. It's a variant of the spiral. Instead of peninsulas, the designer squeezes the f-orbital section under Group 3, so this is analogous to the wide table solution.

The circular diagrams convey the sense of periodic return but the wide table displays the magnitudes more clearly.

This designer places hydrogen in group 18 forming a triad with fluorine and chlorine. Helium is in Group 17 and mercury in the usual Group 12 .

This version is different. 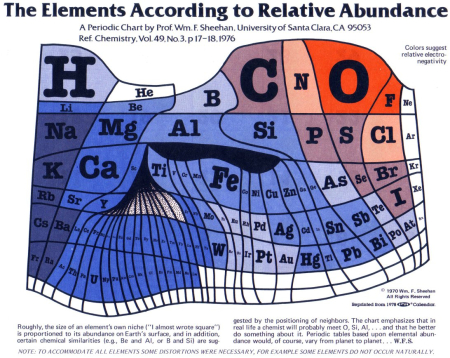 The designer chooses a statistical property (abundance) as the primary organizing principle. The key insight is that the lighter elements in the top few rows are generally more abundant - thus more important in a sense. The cartogram reveals a key weakness of the spiral diagrams that draw the reader's attention to the outer (heavier) elements.

Because of the distorted shapes, the cartogram form obscures much of the other data. In terms of the unsettled issues, hydrogen and helium are placed in Groups 1 and 2. Mercury is in Group 12. Group 3 is squeezed inside the main table rather than shown below.

The centerpiece of the article Chris sent me is a network graph.

This is a complete redesign, de-emphasizing the periodicity. It's a result of radically changing the definition of similarity between elements. One barrier when introducing entirely new displays is the tendency of readers to expect the familiar.

I found the following articles useful when researching this post:

Tags:
Share
junkcharts
http://junkcharts.typepad.com/junk_charts/
Related news
54 ways coronavirus changed the world 2 days ago
An Incalculable Loss 6 days ago
They Were Us. 7 days ago
0 comments