The Financial Times called out a twitter user for some graphical mischief. Here are the two charts illustrating the plunge in Bitcoin's price last week : (Hat tip to Mark P.) 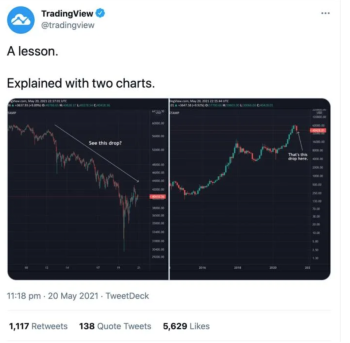 There are some big differences between the two charts. The left chart depicts this month's price actions, drawing attention to the last week while the right chart shows a longer period of time, starting from 2012. The author of the tweet apparently wanted to say that the recent drop is nothing to worry about.

The Financial Times reporter noted another subtle difference - the right chart uses a log scale while the left chart is linear. Specifically, it's a log 2 scale, which means that each step up is double the previous number (1, 2, 4, 8, etc.). The effect is to make large changes look smaller. Presumably most readers fail to notice the scale. Even if they do, it's not natural to assign different differences to the same physical distances. These price charts always miss the mark. That's because the current price is insufficient to capture whether a Bitcoin investor made money or lost money. If you purchased Bitcoins this month, you lost money. If your purchase was a year ago, you still made quite a bit of money despite the recent price plunge.

The following chart should not be read as a time series, even though the horizontal axis is time. Think date of Bitcoin purchase. This chart tells you how much $1 of Bitcoin is worth last week, based on what day the purchase was made. 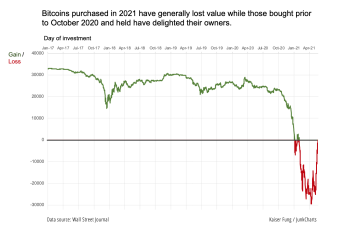 People who bought this year have mostly been in the red. Those who purchased before October 2020 and held on are still very pleased with their decision.

This example illustrates that simple transformations of the raw data yield graphics that are much more informative.