Andrew jumped on the Benford bandwagon to do a tongue-in-cheek analysis of numbers in Hollywood movies (link). The key graphic is this: 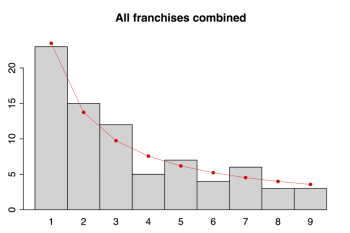 Benford's Law is frequently invoked to prove (or disprove) fraud with numbers by examining the distribution of first digits. Andrew extracted movies that contain numbers in their names - mostly but not always sequences of movies with sequels. The above histogram (gray columns) are the number of movies with specific first digits. The red line is the expected number if Benford's Law holds. As typical of such analysis, the histogram is closely aligned with the red line, and therefore, he did not find any fraud.

I'll blog about my reservations about Benford-style analysis on the book blog later - one quick point is: as with any statistical analysis, we should say there is no statistical evidence of fraud (more precisely, of the kind of fraud that can be discovered using Benford's Law), which is different from saying there is no fraud.

Andrew also showed a small-multiples chart that breaks up the above chart by movie groups. I excerpted the top left section of the chart below: 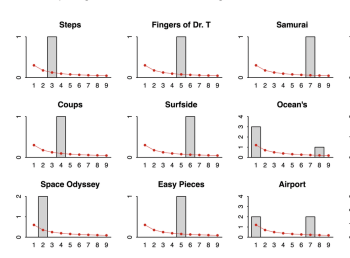 The genius in this graphic is easily missed.

Notice that the red lines (which are the expected values if Benford Law holds) appear identical on every single plot. And then notice that the lines don't represent the same values.

It's great to have the red lines look the same everywhere because they represent the immutable Benford reference. Because the number of movies is so small, he's plotting counts instead of proportions. If you let the software decide on the best y-axis range for each plot, the red lines will look different on different charts!

You can find the trick in the R code from Gelman's blog.

First, the maximum value of each plot is set to the total number of observations. Then, the expected Benford proportions are converted into expected Benford counts. The first Benford count is then shown against an axis topping out at the total count, and thus, relatively, what we are seeing are the Benford proportions. Thus, every red line looks the same despite holding different values.

This is a master stroke.

Tags:
Share
junkcharts
http://junkcharts.typepad.com/junk_charts/
Related news
Four numbers, not as easy as it seems 1 week ago
Dataviz is good at comparisons if we make the right comparisons 3 weeks ago
Visualizing the impossible 1 month ago
0 comments