ArsTechnica published the following chart in its article titled "Grim new analyses spotlight just how hard the U.S. is failing in  pandemic" (link). 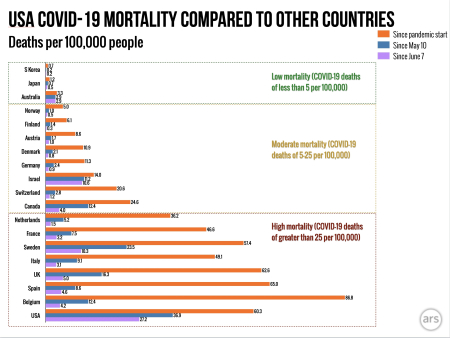 There are some very good things about this chart, so let me start there.

In the D corner, this chart also deserves a high score. It selects a reasonable measure of mortality, which is deaths per population. It simplifies cognition by creating three grades of mortality rates per 100,000. Grade A is below 5 deaths, Grade B, between 5 and 25, and Grade C is above 25.

A small deduction for not including the source of the data (the article states it's from a JAMA article). If any reader notices problems with the underlying data or calculations, please leave a comment.

So far so good. And yet, you might feel like I'm over-praising a chart that feels distinctly average. Not terrible, not great.

The reason for our ambivalence is the V corner. This is what I call a Type V chart. The visual design isn't doing justice to the underlying question and data analysis.

The grouped bar chart isn't effective here because the orange bars dominate our vision. It's easy to see how each country performed over the course of the pandemic but it's hard to learn how countries compare to each other in different periods.

How are the countries ordered? It would seem like the orange bars may be the sorting variable but this interpretation fails in the third group of countries.

The designer apparently made the decision to place the U.S. at the bottom (i.e. the worst of the league table). As I will show later, this is justified but the argument cannot be justified by the orange bars alone. The U.S. is worse in both the blue and purple bars but not the orange.

This points out that there is interest in the change in rates (or ranks) over time. And in the following makeover, I used the Bumps chart as the basis, as its chief use is in showing how ranking changes over time. 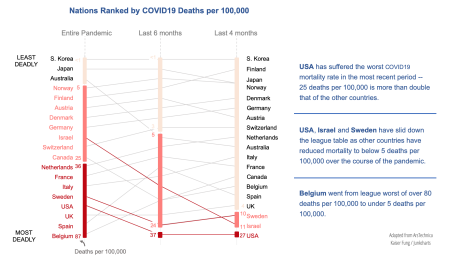 Better clarity can often be gained by subtraction: 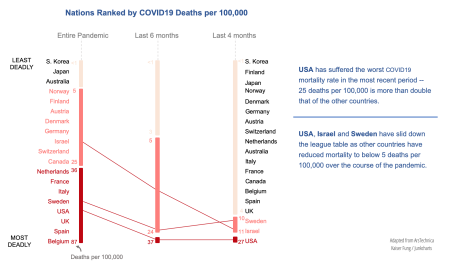 Tags:
Share
junkcharts
http://junkcharts.typepad.com/junk_charts/
Related news
Another reminder that aggregate trends hide information 9 hours ago
Dataviz is good at comparisons if we make the right comparisons 4 weeks ago
Visualizing the impossible 1 month ago
0 comments