One of the amazing economic stories of the moment is the unemployment rate, which at around 4% has returned to the level last reached during the peak of the tech boom in 2000. The story is much more complex than it seems.

I devoted a chapter of Numbersense (link) to explain how the government computes unemployment rates. The most important thing to realize is that an unemployment rate of 4 percent does NOT mean that four out of ten people in the U.S. are unemployed, and six out of ten are employed.

On the flip side, who the government counts as "employed" also matters! Part-timers are considered employed. They are counted just like a full-time employee in the unemployment metric. Part-time, according to the government, is one to 34 hours worked during the week the survey is administered.

The following chart then shows that despite the unemployment rate looking great, the U.S. labor market in 2018 looks nothing like what it looked like from 1990 to 2008. 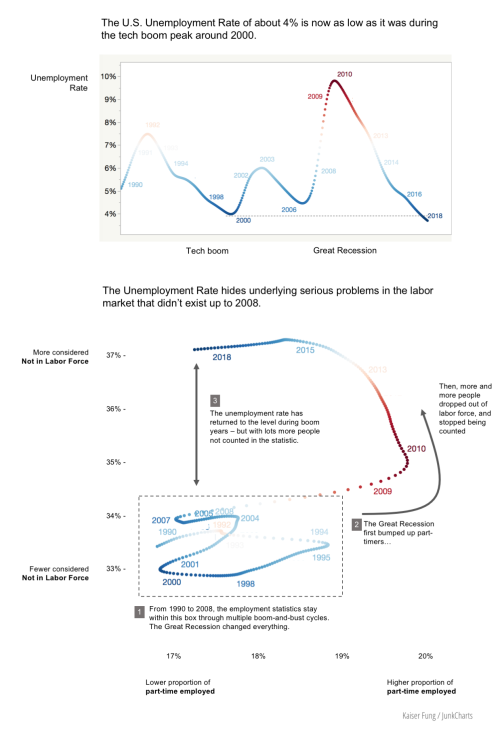 Technical notes: all the data are seasonally adjusted by the Bureau of Labor Statistics. I used a spline to smooth the data first - the top chart shows the smoothed version of the unemployment rates. Smoothing removes month-to-month sharp edges from the second chart. The color scale is based on standardized values of the smoothed data.

Tags:
Share
junkcharts
http://junkcharts.typepad.com/junk_charts/
Related news
Cornell must remove the logs before it reopens the campus in the fall 6 days ago
Increased case counts not just from increased testing 1 week ago
Presented without comment 2 weeks ago
0 comments