I like Alberto's discussion of the attractive maps about donors to Democratic presidential candidates, produced by the New York Times (direct link).

Here is the headline map: 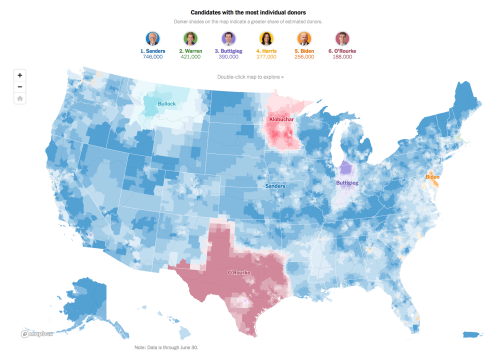 The message is clear: Bernie Sanders is the only candidate with nation-wide appeal. The breadth of his coverage is breath-taking. (I agree with Alberto's critique about the lack of a color scale. It's impossible to know if the counts are trivial or not.)

Bernie's coverage is so broad that his numbers overwhelm those of all other candidates except in their home bases (e.g. O'Rourke in Texas).

A remedy to this is to look at the data after removing Bernie's numbers. 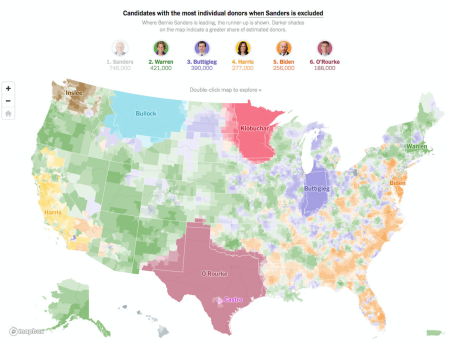 This pair of maps reminds me of the Sri Lanka religions map that I revisualized in this post. 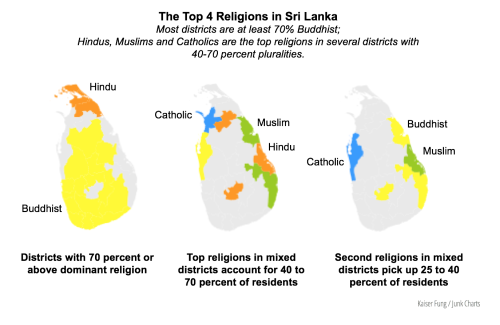 The second map in the NYT's donor map series plots the second-rank candidate in all the precincts that Bernie Sanders lead. It's like the designer pulled off the top layer (blue: Bernie) to reveal what's underneath.

Because all of Bernie's data are removed, O'Rourke is still dominating Texas, Buttigieg in Indiana, etc. An alternative is to pull off the top layer in those pockets as well. Then, it's likely to see Bernie showing up in those areas.

The other startling observation is how small Joe Biden's presence is on these maps. This is likely because Biden relies primarily on big donors.

See here for the entire series of donor maps. See here for past discussion of New York Times's graphics.

Tags:
Share
junkcharts
http://junkcharts.typepad.com/junk_charts/
Related news
Behind the million 9 hours ago
Light entertainment: politics down under 7 days ago
Scale of one million deaths 1 week ago
0 comments